Satellite Imagery/Video of the USA from space 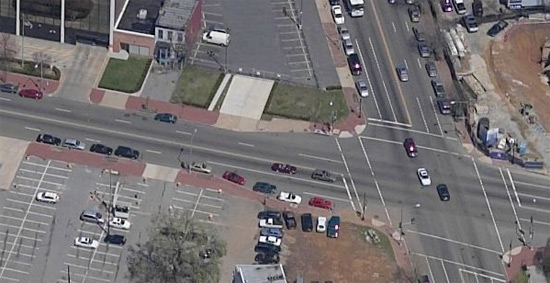 What would you think if the government was recording live satellite video imagery of the entire USA, up close? What if a crime was committed but wasn’t discovered till later on? The government could literally rewind time and track the entire path of the escape vehicle, leading to the arrest of the perpetrator.

According to the wikipedia, the USA is approximately 3,718,711 square miles in size.

Using these numbers, if you were to take the USA and squeeze it into a flat, square shape,it would be approximately 1,928 miles in width and 1,928 miles in length.

If you were to photograph the USA at 431,309,824 pixels per square mile (approximately three times higher resolution than current internet satellite/aerial imagery gives you), then you would use 1,603,257,976,815,616 pixels to photograph the entire USA.

With a typical compression algorithm, you could theoretically get it down to around a third of that size… probably around 960 terabytes.

Now, let’s theoretically record this area at 30 frames per second. At first glance, you’re probably thinking, “whoa! 28,878 terabytes a second???”. But you have to remember that this would be video you’re dealing with. A good video compression algorithm would only record the differences between frames. And trust me, a TON of those pixels aren’t going to change noticeably in that small space of time. Pretty much all you’d be recording would be people and vehicles moving across the face of an otherwise static and unchanging image. So let’s just say that less than 1% of that square mileage would appear to have moved at all.

Which means you’d probably have less than 5 terabytes worth of image differences per frame. At this estimate, 1 second of video would only take up around 150 terabytes (not 28,878). This means that we could record the USA at 540,000 terabytes per hour. Assuming that we took a complete snapshot of the entire USA every single hour (960 terabytes), then 24 hours of the USA would take up around 12,678 petabytes.

This may sound like a completely absurd size, but it’s not so mind-numbing when you think about the new holographic data storage technologies that are being developed right now. Terabytes will be cheaper than megabytes are now.

What if they only recorded major cities for now, and they were to do it at only, say, 5 frames per second? Or even just one frame per second for starters? They could still track vehicles and do basic surveillance.